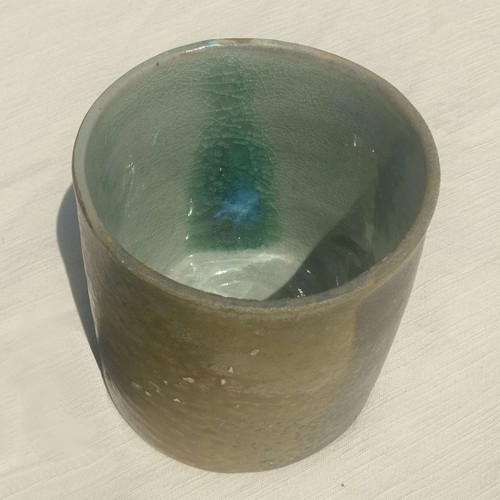 A cylindrical vase, thrown in stoneware, unglazed on the outside and a wood ash glaze on the inside.

Fired on its side, this vase has acquired an interesting and attractive range of markings from the firing.

On the outside, the bottom has three marks from the wadding supporting the pot, and warm gloss and matt orange tones. The other side has a thick layer of golden green ash that has melted and run down the side. There is also some ash on the base of the pot.

The inside has a clear, crazed glaze with a slight blue tint. On the side that was the bottom in the firing the glaze has pooled to give a much more intense colour, whilst at the top of the opposite side the glaze has thinned and formed some attractive patterns.